The History of the Silver Fox

By Eric Tudor of Riverwind Rabbity and Farm

The Silver Fox Rabbit was the second truly American bred rabbit, the first being the American Blue. In each of these breeds, a Checkered Giant sport was involved. What is now known is that the Silver Fox was originated and developed during the 1920's 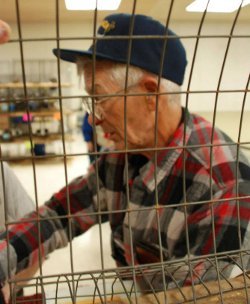 Image by Eric Tudor
by Mr. W.B. Garland of North Canton, OH. This man was energetic and had a tremendous knowledge of the essentials of breeding to develop a desired trait. He was a pioneer in many phases of development of the domestic rabbit, its care and breeding.

Mr. Garland had a black self Checkered Giant doe. She had the unusual quality of having a large number of white hairs scattered over her body. He also had some English Silvers. The Silver had a 6 pound weight limit for showing, its fur was coarse, and similar to that of a guinea pig, and it was a cobby and compact rabbit. This trait was a feature that caught his fancy. He envisioned a blocky "Hereford" type rabbit, similar in color to the English Silver, but with a desirable fur and more practical utility size.

Image by Eric Todor
He wanted the Silver type and the checkered size! After considerable difficulty, a successful mating of the small silver buck and the large black doe was made. From his first litter, the largest buck was bred back to his mother and the largest does were bred back to the father. With about 40 hutches, and after 14 years of consistent culling, he had a rabbit that was breeding true to type and color and was the first rabbit of its day to dress out at a pound under its live weight. He developed both blacks and blues. Please not that there are no Flemish Giant blood in the Silver Fox other than through the ancestry of the Checkered Giant itself.

In September 1971 the National Silver Fox Rabbit Club was officially chartered with the ARBA, with 15 members. The Silver Fox had been on the verge of extinction and were successfully brought back. They are currently being worked on again to improve type and color and to increase their numbers. Most breeders are hard pressed to fill the demand for this breed and waiting lists are not uncommon at the present time.